Print specialist Curveball Printed Media has announced the launch of their WiFi-enabled video brochures with onboard Android OS and touch-screen user interface. Adam Hazelwood, the CEO, stated, “the second generation of video brochures has arrived. Our customers can now update brochures already in the hands of their customers by uploading content over the internet using a desktop app’”.

This advance in technology expands the scope of video brochures beyond the traditional B2B marketing arena and into sectors such as training, education, customer communications, and marketing research. Hazelwood went on the say, “Not only is it environmentally sound to refresh content over the internet, but it also saves our clients a huge amount of money and opens doors to a broader audience.”

Traditional video brochures have been in circulation for around seven years. They come in a variety of LCD screen sizes and print formats, Video content is stored in the flash memory of the device, and controlled using buttons located on the screen console. Their use is to reach hard to find senior executives and influencers in the buying cycle. The new WiFi-enabled variety has the functionality of the Android OS at its fingertips, a touch-screen acting as the user interface in the same way it does on a smart-phone or tablet. By doing so, evolving the product from an essentially dumb-terminal to a bespoke communications device printed in the livery of the sponsoring organization.

Hazelwood concluded, “The possibilities for this platform are endless. Initially, we see early adoption from the training and real estate sector; however, it won’t be long before restaurants are using them as printed menus with onboard ordering and payment capabilities”. 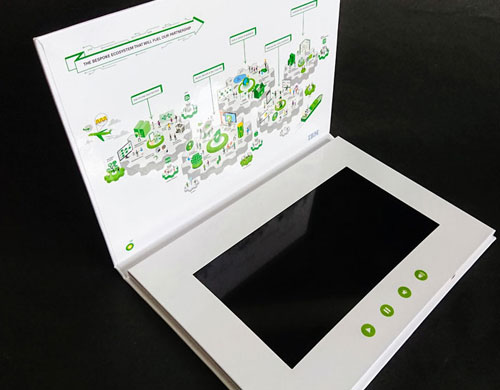 Adam and his company far exceeded my expectation. After looking at other competitors online I knew Curve Ball would be my choice. From...

My team and I used Curveball to create two different video brochures for our client. Not only did they come out beautifully, but...

My company wanted to use video brochures for the first time, and we chose Curveball because of their fast turn around, and they...

I had looked at several providers of video brochures before selecting Curveball. I requested quotes and information from about 5 companies, but Adam...

We used Curveball Printed Media to supplement client deliverable back in August 2019. We ordered 15 - 7 inch screens in A5 brochure...

Sep 18, 2019
We use cookies on our website to give you the most relevant experience by remembering your preferences and repeat visits. By clicking “Accept All”, you consent to the use of ALL the cookies. However, you may visit "Cookie Settings" to provide a controlled consent.
Cookie SettingsAccept All
Manage consent

This website uses cookies to improve your experience while you navigate through the website. Out of these cookies, the cookies that are categorized as necessary are stored on your browser as they are essential for the working of basic functionalities of the website. We also use third-party cookies that help us analyze and understand how you use this website. These cookies will be stored in your browser only with your consent. You also have the option to opt-out of these cookies. But opting out of some of these cookies may have an effect on your browsing experience.
Necessary Always Enabled
Necessary cookies are absolutely essential for the website to function properly. This category only includes cookies that ensures basic functionalities and security features of the website. These cookies do not store any personal information.
Non-necessary
Any cookies that may not be particularly necessary for the website to function and is used specifically to collect user personal data via analytics, ads, other embedded contents are termed as non-necessary cookies. It is mandatory to procure user consent prior to running these cookies on your website.
SAVE & ACCEPT